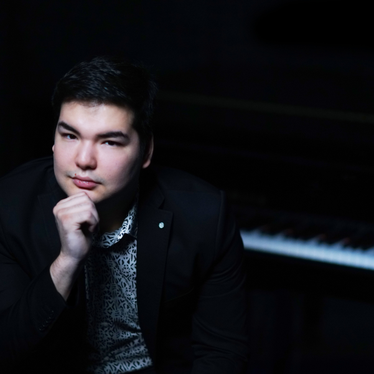 Alim Beisembayev was born in Kazakhstan in 1998 and began playing the piano at the age of 5. He moved to study at the Central Music School in Moscow in September 2008 and later that year, he won the International Television Contest for Young Musicians ‘Nutcracker’ which led to wide exposure around Russia from a young age. By the age of 12, Alim had played with numerous orchestras and conductors and after two years in Moscow, he pursued his studies at the Purcell School for Young Musicians where he was taught by Tessa Nicholson. In addition to his already wide performing experience, Alim won several prizes during his time at the Purcell School including the First Prize at the Junior Cliburn International Competition in the US.

In 2016, Alim continued studying with Tessa Nicholson at the Royal Academy of Music where he was supported by a generous scholarship. He achieved numerous successes the Jaques Samuel Intercollegiate Competition which led to his Wigmore Hall recital debut in June 2018. Later that year, Alim attended the Verbier Festival Academy where he performed and had masterclasses. Most recently, he won the Second Prize at the Vigo International Competition with Martha Argerich as president of the Jury.

Alim enjoys collaborating with other musicians and regularly performs in chamber ensembles in London. Currently, Alim is completing his Master's degree at the Royal College of Music with professors Vanessa Latarche and Dmitry Alexeev. He is generously supported by the ABRSM Scholarship and is an award holder of the Countess of Munster, Hattori Foundation, and the Drake Calleja Fund trusts.